Happy, energetic, and hardworking, the Border Collie is a popular breed of dog. In fact, the American Kennel Club ranked Border Collies at number 38 in its ranking of popular dog breeds, and the breed has enjoyed a rise in popularity in recent years.

These handsome black and white dogs, with bright eyes and expressive ears, are more than just a pretty face. Border Collies are often called the smartest of all the dog breeds.

Their intelligence, agility, and stamina make them ideal working dogs and they have been a favorite choice among farmers and ranchers to help herd sheep, and other livestock animals.

Keep reading to learn the border collie history and story of this wonderful breed, but first, a tribute to Adam Telfer and Old Hemp.

Although dogs similar to today’s border collies were most likely working alongside farmers as far back as the first century B.C., all the border collies alive today can trace their roots back to one common ancestor, a dog named Old Hemp.

Roman invaders to the British Isles in the first century brought with them dogs that were used to control and move their livestock. Very quickly, the dogs spread across Britain, as well as Wales, Ireland, and Scotland.

Later, when the Roman Empire had fallen, and the Vikings invaded England, another type of dog was introduced, a smaller herding dog that resembled the Spitz.

These dogs bred with the larger Roman dogs and the results were medium-sized dogs with longer fur that were well-adapted to the geography and climate of the British Isles, excelled a herding, and were agile and athletic… the forerunner of today’s Border Collie.

It was one of these dogs that, alone, is the common ancestor of all of today’s Border Collies.

This specific dog, named Old Hemp, was born in September 1893 in West Woodburn in Northumberland to a black sheepdog named Meg and a tri-colored herding dog named Roy.

Old Hemp didn’t look like the Border Collies of today with his tri-colored coat and minimal amounts of white fur, but he was an extraordinary dog.

Herding dogs in the days prior to dog shows and breed standards were bred more for their abilities than for their appearances as evidenced by Old Hemp.

The dog’s owner and breeder, Adam Telfer, was impressed with Old Hemp’s intelligence, natural instincts, and herding ability and the animal quickly became the top working dog on the farm.

One aspect of Old Hemp’s herding style that made him unique among other sheepdogs is that he did not rely on barking to do his job. Instead, he used his body positions. He also seems to know how and where the sheep would be moving and was able to quickly and easily head them off.

Old Hemp’s owner, Adam Telfer, was quite experienced with sheepdogs but had never before seen a dog of Old Hemp’s caliber.

Telfer was once quoted as boasting about Old Hemp by saying that he “flashed like a meteor across the sheepdog horizon”. He added, “There never was such an outstanding personality.”

Old Hemp’s reputation as an outstanding herder made him highly sought after as a stud dog. People around the region wanted puppies sired by the legendary herding dog so they brought their dames to Telfer.

By some accounts, Old Hemp may have had as many as 200 pups.

Most of these animals continued the traits that made Old Hemp such a preeminent herding dog, as well as his physical characteristics, including his rough coat and medium build.

Because his lineage is responsible for the propagation of the Border Collie traits, Old Hemp has been called the ‘foundation sire’ of the breed…the animal that originated the dog breed.

Old Hemp is listed in the stud book of the International Sheepdog Society, which was founded in Scotland in 1906.

There are no existing records to show if Telfer entered Old Hemp in any of the sheepdog trial events. It is known, however, that Old Hemp’s grandson, a dog named Sweep, that was also owned and bred by Telfer, excelled at these types of competitions.

In fact, Old Hemp produced a steady line of champions. Between 1906 and 1951, every one of the twenty-nine dogs that captured this championship was from Old Hemp’s direct lineage.

Other breeders of herding dogs took notice of the qualities that made Old Hemp such a superior animal. They sought to emulate these traits in their own dogs, further strengthening the overall breed.

With breeders producing dogs with similar looks and abilities, it was time to name the breed and declare it – or at least try to – its own specific breed of dog.

First of their Name

The first reference to this breed of dog is called a Border Collie can be traced back to 1915 when it was coined by the secretary of the International Sheep Dog Society, James Reid.

He was seeking a way to distinguish the dogs he was registering in the International Sheep Dog Society from the other types of Collies, including the Scotch Collie, the Smooth Collie, and the Rough Collie.

These kinds of collies all emerged from the same stock of dogs on the British Isles. But as dog shows became popular and breed standards were set in place in the 1850s and 1860s, the collie breeds got more compartmentalized as breeder bred dogs to meet the specific standards of the different collie breeds.

The first word in the dog breed’s name, ‘Border’, most likely is a place name referring to the border area between England and Scotland. The term ‘collie’ or ‘colley’, however, has a bit more complex etymology.

‘Collie’ is thought to originate in the Celtic language as a term meaning ‘useful’.

Others point out that colley sheep in the Scottish Highlands is a type of sheep that are noted for their black markings, adding that ‘colley’ is an old Anglo-Saxon word for the color black.

It is, therefore, quite conceivable that the Border Collie took its name from the black markings on its coat.

As early as the 1880s and 1890s, exceptional Border Collies were being exported to other countries where sheep ranching was a leading agricultural practice.

Expert herding dogs from the British Isles were sent to Australia, New Zealand, the United States, Canada, and Argentina. As word of the Border Collies’ prowess spread internationally, breeding practices and breeding stock from England and Scotland were adopted by dog breeders around the globe.

Although they were not yet known as Border Collies, the sheep herding dogs were first brought to New Zealand’s rolling pasture lands as early as 1858.

James Lilico, a resident of Christchurch, New Zealand, was responsible for bringing several dogs from Scotland’s top sheepdog breeders to New Zealand. Among these dogs was Hindhope Jed, a descendant of Old Hemp’s that was born in 1895 in the area of Hindhope, Scotland, and bred by John Elliot.

Elliot’s superb dogs were sought after by serious aficionados of the breed. In fact, Elliot even gifted one of his Border Collie pups to Queen Victoria.

Hindhope Jed wasn’t the only Border Collie that Lilico imported to New Zealand.

He brought in other superb herding dogs as well, including Old Bob, Ness, Maudie, and Moss of Ancrum. 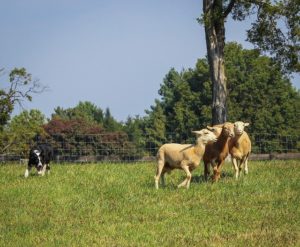 These dogs dominated the sheepdog trial circuit and helped to energize the breeding stock for Border Collies in both New Zealand and Australia.

In Canada and the United States in the years following the end of the Civil War, prominent sheep farmers started to import sheep from Scotland and other areas.

Coming over on the cargo ships with the sheep were the sheepdogs, including dogs that would later be called Border Collies.

The dogs’ handlers demonstrated the animals’ abilities to the amazed American ranchers and many of them sent word back to Scotland and England asking for more herding dogs to be sent across the Atlantic to the Americas.

Settlers pushed westward into the Great Plains of the United States and Canada, and the vast prairies proved to be ideal for raising livestock.

Prior to the widespread use of barbed wire fencing, which was invented in 1874, the prairie was a wide-open region. It was necessary to move large herds of sheep and cattle across great distances, either to take them to fresh pasture areas, to move them to winter grazing grounds, or to take them to market.

The task of containing and moving the livestock was to the responsibility of ranch hands on horseback, with the invaluable assistance of herding dogs, particularly Border Collies.

According to written accounts of the day, a herd of a thousand sheep could be managed by one rancher and one good sheep herding dog.

Just like the breed’s ‘foundation sire’, Old Hemp, a top quality Border Collie of the 1880s to 1900s only barked to warn of danger.

The working dog never left the sheep unattended and was not distracted by a flushed rabbit or pheasant. If a predator threatened the flock, the Border Collie was ready to protect his charges.

One of the first sheep herding trials in the United States took place in 1880 in Philadelphia.

Many area newspapers reported on the event, which was called the “Great International Collie Trial”.

At this time, the name Border Collie had not yet been assigned, so the umbrella term, “collie”, was used.

Dogs competing in the event, therefore, included all types of collie dogs. The dog that caught everyone’s attention was a Scottish import.

Oscar, a tan and black collie, was a sheep herding trial champion in Scotland four years earlier when his breeder, a gentleman named Steele, entered him.

Afterward, Thomas S. Cooper, who earned his living importing collies to the United States, brought Oscar to Pennsylvania to work in the Philadelphia stockyards. Under the ownership of Charles Pugh, a stockyard worker, Oscar took home the top honors at the “Great International Collie Trial.”

While the Border Collie was earning a reputation for its tremendous herding ability, the dog was also working its way into the hearts of dog lovers. Energetic and tireless when working, the breed was calm, docile, and loving.

For the twentieth century, the Border Collie had a name, but not an official recognition, at least not in the United States.

The dog that helped to change all that was Wiston Cap. Born in 1963, Wiston Cap has been singled out as the dog that had the most influence on the Border Collies we see today.

The dog was the product of W.S. Hetherington’s breeding efforts and was shown and handled by John Richardson.

An exquisite animal, Wiston Cap is the dog that set the standards for the breed, as designated by the International Sheep Dog Society.

All Border Collies since then have been measured and evaluated against the standards set by Wiston Cap. A champion and a stud, Wiston Cap’s descendants include three Supreme Champions.

The International Sheep Dog Society is today located in Bedford, England and the organization keeps careful breeding records for the Border Collies bred around the world.

It was through their efforts, and the efforts of Border Collie enthusiasts everywhere, that the American Kennel Club officially recognized the Border Collie in 1995.

More and more people who are unrelated to the farming and ranching industry are discovering the Border Collie breed.

The traits that make this breed an exceptional herding dog also make it a great family dog when given the proper training and attention. The Border Collie is intelligent, attentive, hard-working, active, agile, affectionate, and athletic.

To this day, more and more border collies are finding their ways off of farms and into the homes of loving families.

While many are still working border collies to this day, the ones that aren’t, still hold their heritage deep in their hearts. Now you know the border collie history. 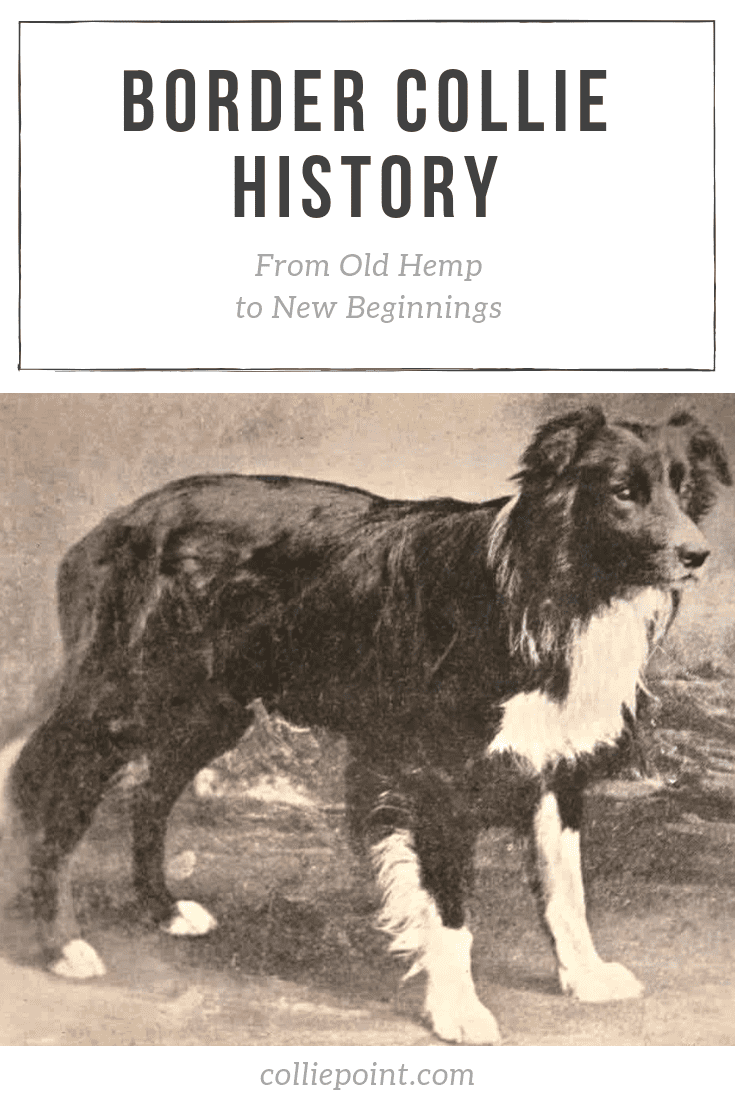 x
Send this to a friend
We use cookies to ensure that we give you the best experience on our website. If you continue to use this site we will assume that you are happy with it.Ok